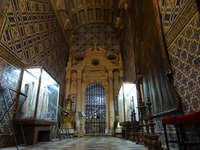 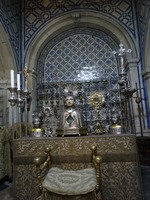 This museum is dedicated to the collection and display of the most valuable pieces that were part of the treasure of the Monastery. The first showcase displays a chasuble, which is said to be from the Martyrs of Morocco. The fabric used in the making of the chasuble is of Moorish origin, from around the 18th century. It is also believed that the tradition of using bells by the Holy Martyrs to call upon unbelievers to preach came from this time.

The other showcase holds some Priestly Garments embroidered in gold thread, as well as a silver monstrance from the 18th century.

In the middle of the treasure chapel, you can see a silver reliquary that contains the skull of St. Teotónio. If you look closely, you can observe two interesting aspects engraved in the reliquary: the year 1621 and the name of Don Prior, who ordered the skull to be separated from the skeleton.

Additionally, there are two 17th century bust-reliquaries made out of of silver that contain the relics of the Five Martyrs of Morocco.

We use cookies to enable the proper functioning and security of our website, and to offer you the best possible user experience.

You can customize your cookie preferences here. Enable or disable the following categories and save your selection.